“The best leader is a great follower of Jesus” is the first tenet of our Rock Leadership Creed and the basis for upcoming leadership training we have been invited to provide to Honors College students at Uganda Christian University.


The concept of “followship” is not as familiar as the many teachings on leadership. It is similar to the “servant leadership” model but with perhaps more emphasis on following along with serving.

Followship is not leading from behind, but rather seeking God’s leading and following hard after Jesus. As we do, others follow us. The Bible tells us Saul failed as the first king of Israel because he impatiently acted on his own rather than following God’s directions. “But now your kingdom will not endure; the Lord has sought out a man after his own heart and appointed him leader of his people, because you have not kept the Lord's command." (1 Sam 13:14)

Joseph, son of Jacob, is a great example of one who followed God at every step. As a result, he overcame being thrown in a well by his brothers and imprisoned due to false accusations to save his people and be second in power only to Pharaoh in Egypt.

Jesus also reminds us that without Him we can do nothing. (John 15:5)

Other key followship and leadership aspects which we will share with the Honors College students in three two-hour sessions on consecutive Sunday afternoons beginning May 24 are:

As always, we will make the training fun by dividing into teams with friendly competition for points based on attendance, timeliness, riddles, problem-solving exercises and team-building activities. All who faithfully attend will receive certificates and the team which collects the most points during the training will receive a special treat at the end.

Please pray God will make an eternal difference in the lives of the Honors College students to lead others by following hard after Him.

-- Mark and Margaret Noblin
Email ThisBlogThis!Share to TwitterShare to FacebookShare to Pinterest

Ripe for the Harvest

I tell you, open your eyes and look at the fields! They are ripe for harvest.
John 4:35

Little did we know when we began to purchase land for Kingdom View that God was putting us in the middle of an upcoming boom in construction of student housing (hostels) for some of the 8,000 students at Uganda Christian University. 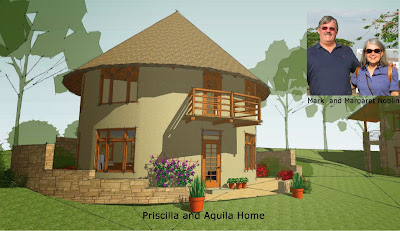 We are purchasing the land from the estate of a former bishop who had a small hostel down the hill from us. Now we have new buildings on the north and east sides of our property that can house nearly 1,000 students. And two more hostels being built are within a three-minute walk from Kingdom View property. How exciting it is to be located where we can do life with this many students, right next door.  As we develop more relationships with the students and others – we believe it is God’s affirmation of His leading to us to disciple those He puts in our path.

To date, we have purchased three of six plots to complete the 1.25 acre acquisition. A final payment for a fourth plot (about $9,000) is due by June 15. We are praying for favorable consideration of a proposal to provide an additional $53,000 to complete purchase of all the plots, plus more funds to get us started on Phase One of our construction plan. Please pray as a decision we are told will be made by May 30.

With the Noblins’ move to Uganda last month, the need for Kingdom View as a place for discipling, teaching and mentoring students and others wanting to grow in their walk with the Lord continues to be highlighted. They have been busy as guest instructors in the UCU Christian counseling department helping students incorporate their identity in Christ into career planning.  Also, the Noblins have the joy of assisting young couples in pre-marriage counseling.

Margaret is busy providing assistance to students and graduates trying to sort out their skills and life plans.  She incorporates an evaluation from the book What Color Is Your Parachute? along with a discussion of how God has designed each of us for a significant purpose.   She helps them create one page resumes which paint a thorough picture of their skills, education and outside interests in a quantitative way.  Providing mock interviews and practice aptitude tests helps them gain confidence before appearing for their job interviews.  It also helps them discern what jobs are best suited in the context of  their life plans.

In April, Northwest Bible Church in Dallas included the Noblins among its list of missionaries receiving financial and prayerful support from the church body. We are excited to begin planning a short term mission trip for people to come and participate next year in what God is doing through the ministry.
Email ThisBlogThis!Share to TwitterShare to FacebookShare to Pinterest
Newer Posts Older Posts Home
Subscribe to: Posts (Atom)

We proclaim freedom in Jesus to overcome spiritual and economic bondage. We are fishers of men who teach people to fish.